Participation refers to the various mechanisms people use to express their opinions and exert influence on social decision-making – whether it’s in politics, economics, social, or cultural life. 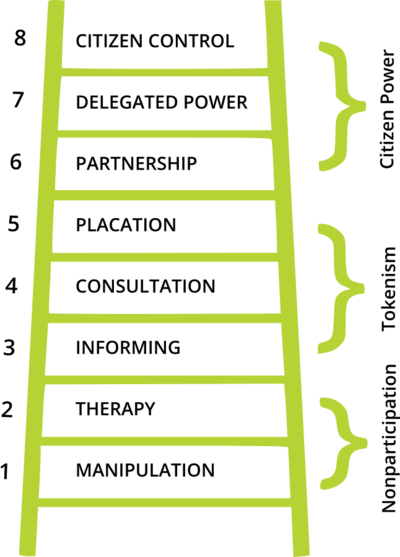 To describe the various levels of citizens’ involvement in planning processes, Sherry Arnstein created a “ladder of citizen participation,” which is one of the most recognized models of its kind.[1]

As shown below, manipulation (1) and therapy (2) are non-participative methods, because they aim to cure or educate participants. They both involve a plan created by an expert, which is considered to be the best.

Informing is a good method of participation, but it usually takes the form of a one-way flow of information, with very limited space for feedback. Consultations such as asking your participants about two options for the next steps in their learning process (or within a civic initiative, an informational neighborhood meeting) are also good steps toward participation. However they often remain rituals, which do not encourage people to participate actively.

Allowing and accepting feedback (placation) gives learners the opportunity to share their opinions on an issue, but still retains the right for you as the power-holder to judge the legitimacy or feasibility of participants' opinions.

Genuine participation takes place through partnership, in which a negotiationprocess is used to distribute power between facilitators and the people learning (in a civic engagement, this occurs between citizens and power holders). In this process, decision-making is shared. For example, you wouldn’t just propose two alternatives, but would ask open-ended questions about what participants want to learn. You would let them co-decide what content and methods they would like to use. Following this logic, the highest level of participation involves people taking action and making decisions about their situations independently. You might delegate your power to participants and let them act as experts in front of the group. Or you might have them conduct a training among themselves, independently from you. This serves as a peer learning initiative (citizens control).

Participation as a Process

Participation is a process with a timeframe and characterized through a dynamical development. In the best case, the quality of participation increases during the whole time. Therefore we want to raise awareness for participation by design. We should take care for leaving enough space in our concepts for participation. We must evaluate during the activity, if our ideal fits still to our activities and if not, take measures to make both congruent again.

As a final stage of empowerment, people can become capable of self-mobilization and the directive role of the facilitator or instructor is falling apart.[2]