When people from different cultures with different backgrounds are involved in the same communication process, it is not unusual for difficulties to arise. Understanding is a complex process. First we must be willing to understand which implies acceptance of the other person. Second, we use existing experience and interprete informations on that basis. This enhances our communication but in the same time complicates it. Especially when people with different backgrounds are included, people tend to accredit a cultural or social "identity" to other people. This article is about these assumptions, their interpretation and how to deal with them preventing stereotypization and in the same time enhancing our consciousness and respect for differences.

Let's imagine the following situation: A volunteer from Germany is at his first week in a children's home in Tbilisi and wants to speak with a representative of the aid organization that invited him.The volunteer is taking the bus. He is planning to arrive more or less on time - he knows he has a bad habit of often arriving late. But the trolley bus comes free from the overhead line. Finally, our volunteer arrives half an hour late. The Georgian conversational partner is feeling stressed. All morning long he was thinking about the fact that he had to be on time to his meeting at 3 pm in the cafe, especially because the meeting is with a German. He plans to arrive early because he does not want to confirm the stereotype Germans have had about Georgians. He arrives 10 minutes early - and has to wait. After 10 minutes he starts to become impatient, after 20 minutes he is annoyed: Does this young man take his job seriously or does he think he has come to take a vacation in Georgia? Direct communication between the two of them would be extremely useful. How would they react? With a joke:"Oh, these punctual Germans!" Or would they hide it? Or would they talk about the situation on a meta-level to exchange their personal expectations and to uncover any reasons for resentment?

Here we are dealing with very different interpretations of the situation. If we attach the persons involved to their national cultures, we risk assuming common stereotypes like: Germans are punctual, Georgians are not punctual. But our example shows that this approach to interpretation is not the only one.

So what about culture? Our example illustrates that culture is more than national culture. There is youth culture, business culture, student culture, female and male culture, regional culture, and many more cultures and subcultures that influence our thinking, perceptions, and opinions.

The example doesn't just illustrate a conversation between a Georgian and a German. You can think of it as an exchange between several "different people" at a time: a young person with an experienced one, a subordinate and a decision-maker, two members of the same social class, people with similar interests, two men... Culture is a system of orientation: It defines our affiliations, it regulates our behavior and it structures our perceptions and interpretations of our environment. Culture consists of different layers and is dynamic, meaning it changes. Without need for contemplation, it tells us how to behave and communicate and what is supposed to be normal. 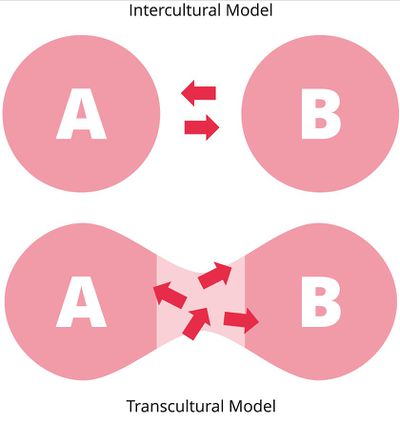 This is why some scientists prefer to use a "transcultural" approach. Interculture assumes that different cultures affect one another mutually, and that behaviors and moral concepts "change allegiance," so to speak. In this way, transculture significantly expands upon the idea of interculture, in which two different systems communicate with one another but stay distinctly separate.

This change in the understanding of culture seems necessary because modern cultures are becoming more and more complex. There is a growing awareness that lifestyles differ not only across national borders but also from region to city to district, for example. My brothers or sisters can have a fundamentally different idea of life than I do, even if they grew up using a very similar environment with similar points of reference. In contrast, a Chinese peasant's daily routine can resemble that of a Polish peasant, even though their direct surroundings differ highly.

The development of modern communication media allows for immediate contact among different people and ideas. A person can be deeply influenced and shaped by a culture (or several cultures) that do not correspond to his or her nationality - experts call this a "cultural hybrid."

A "German" example: As a student of Slavic studies, I feel much more comfortable working with Russian literature than German literature; my housemate is a Spanish punk. I am also deeply interested in Buddhism and I like to listen to Argentinean Tango. Even if it sounds trivial, all these aspects are part of my identity. I have many very different cultural imprints and reference systems linked within myself in a (mostly) consistent way.

Transculture is an inclusive, integrative concept - when I am aware of my diverse cultural imprints, I find many different possibilities for communication with other people (he or she plays soccer like me; has a sister etc.). The focus on similarities instead of differences creates a good basis for joint communication. Each aspect, like religion for example, is not considered in a generalized way but in its individual form. Maybe as a devout Christian from Bulgaria, I am more connected to a devout Muslim from Tajikistan than with a German atheist.

The concept of transculture - and this is an opportunity and a challenge at the same time - is characterized by "high individualization and differentiation. Differentiation does not follow geographic or national guidelines, but cultural exchange processes."[1]

To analyze different perceptual patterns and behaviors in your project team, the following cultural dimensions might be helpful (see also: E. U. Kinast: Evaluation interkultureller Trainings, Lengerich 1998; the dimensions are analyzed and formulated by Geert Hofstede and others[2]

Within these general assumptions, we often position ourselves between two opposing poles, but we also have our own preferences that we've developed over the course of time. Every encounter with different people should be an invitation to become aware of where we and other people stand. Without devaluing the other person's position, we can exchange ideas and find a proper solution - and we learn that behaviors don't necessarily depend on the country a person is from.