Four Sides of a Message

Communication psychologist Friedemann Schulz von Thun believes that each message, whether verbal or nonverbal, has four levels of meaning. They are deeply woven into things you say or hear, so it can be very difficult to be sure that your counterpart hears the meaning you intended in the message you expressed. Understanding means being able to “break down” the message correctly into its components of the factual level, appeal level, self-revelation level, and relationship level.

The model shows there is no one way of decoding messages. Every message has to be observed individually because the people involved, their relationships to one another, their moods, the situation, and the setting all play important roles. The same sentence spoken by a different person in another situation can mean something completely different. 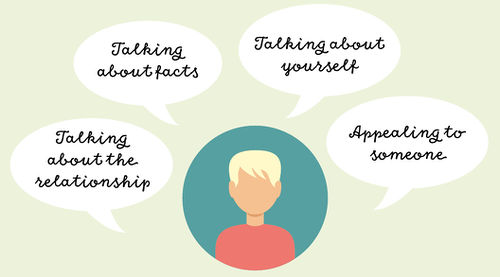 Many people believe that they predominantly communicate factually, and attribute too large a role to this level: “If I formulate my concerns as accurately as possible, everyone will understand me correctly.” When you communicate with other people, you’re automatically taking a position in response to them. This can often be recognized in non-verbal behavior: uncertainty, speaking nervously or too quickly, tense posture, not making eye contact...

The message also reveals the sender's position towards the receiver, what he or she thinks of him or her. This can be revealed in the choice of words, the tone of voice, and other non-verbal accompanying signals. The receiver has an especially sensitive ear for this facet of the message, because it involves him or her not only as the recipient of communicated information, but as a person treated (or mistreated) in a particular way. In the example of the communication of this theory, the reader develops different feelings based on the way the information is presented, whether it is through a cordial approach, authoritative lecturing, or even a neutral treatment that does not concern his or her personality.

A message not only contains objective information about the situation and relational aspects that involve the recipient, it also gives information about the sender who initiated the interaction and encoded the initial information. Without going too deeply into this aspect, from a few words we can conclude that the sender can express him or herself in English, has done some reading, and has some understanding of the Theory of Four Sides of a Message etc.

Almost all messages are intended to have some impact on the receiver. Hence, the message also serves to cause the receiver to do, or not to do, and to think or feel certain things. This attempt to influence can be more or less blatant. The appeal aspect has to be separated from the relationship aspect, since the same appeal can be combined with completely different types of information about the relationship. The appeal of this text is to give information about the theory, but also to encourage people to reflecting their communication habits and improving.