This analysis is based on the premise that conflicts have three major components: the context or situation, the behavior of those involved and their attitudes. These three factors influence each other, hence the arrows leading from one to another. For example, a context that ignores the demands of one group is likely to lead to an attitude of frustration, which in turn may result in protest. This behavior might then lead to a context of further denial of nights, contributing to great frustration, perhaps even anger, which could erupt into violence. Work that is done to change the context, (by making sure that demands are acknowledged), to reduce the level of frustration (by helping people to focus on the long-term nature of their struggles) or to provide outlets for behaviors that are not violent will all contribute to reducing the levels of tension.

In a conflict, the violent behavior we see has its roots in people’s attitudes and the political-economic context. The ABC triangle is a simple framework for exploring the impact and causes of conflict. You should complete one triangle for each of the major groups involved in the conflict. 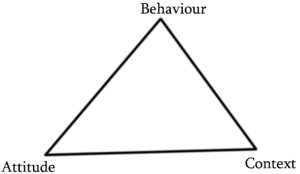 1. draw up a separate ABC Triangle for each of the major parties in the conflict situation

2. on each triangle, list the key issues related to attitude, behavior and context from viewpoint of that party/person. If the parties/persons are participating in the analysis, then they can each make a triangle from their own perspective.

3. Indicate for each party what you think are their most important needs/or fears in the middle of their own triangle. This will be YOUR perception.

4. Compare the triangles, noting similarities and differences between the perceptions of the parties/persons.