It is a challenge for facilitators to implement abstract competency framework into learning. One has to choose between different and sometimes also conflicting models of competency description and then describe the competency goals in a realistic and for the participants useful way.

Competendo proposes a model that proved in different educational contexts, inspired by the competency model of the German Federal Institute for Vocational Education and Training.

Lazy words are describing lazy people. Without mobilizing any energy I can perceive something or become familiar with a topic. The following table of active words might offer inspiration for replacing them:[2]

Organizing a small local project can lead to the development of skills, competencies and knowledge in the organizers and the target group.A team organized an environmental workshop for young people. The participants decided to organize a cleaning event in a nearby forest, where they and their neighbors collected garbage. Now the team examines the chart of the key competencies and tries to describe the educational impact of this project. For your organization, you could define such levels of competence development with the help of this model with greater precision. This will help you later on in describing and validating the development of competencies of your team and target group. 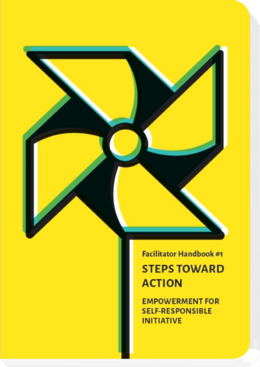 First handbook of our Handbooks for Facilitators: Read more