During
Simulation Games gain more and more importance when it comes to action oriented and empowering methods in formal and nonformal education. Proper Simulation Games allow a practical understanding of complex interconnections in the fields of economy, politics and society in general. The participants and learners act as certain actors in real life in a predefined scenario which allows them to experience it. Simulation Games last from a few hours to a couple of days. Simulation games can help people to understand the need for public involvement and for finding sustainable solutions through experiential learning. Simulation games differ, depending on the length and complexity of the scenario involved. Thus preparation time also differs.

The success of a simulation depends not only on the quality of experience and emotional and cognitive reflection but also on a clear scenario and realistic and coherent roles. Therefore, facilitators must be able to structure the evaluation and to show respect for the participants at every level.

Simulation games show different levels of political and civic action and make them conceivable to participants. Democracy assumes that spaces exist, in which different interests clash and in which decisions can be made. In complex societies, democratic actors can only be influential if they step out of their confined sector and start to interact with others in order to exchange opinions. Therefore, simulation games are a good frame to do this.

On the one hand, there is the frame of a political culture which is formed on the basis of its principles, norms and rules. Metaphorically speaking this first frame can be seen as a discursive political space.

On the other hand, this room is formed by political and social actors - individuals, CSPs, parties or companies.

Finally, those people who move in a political space act in a specific, political (democratic?) way.

Therefore, a simulation game has, as far as our concept is concerned, mainly two functions. The first function is the experience of political processes in a playful way. Participants are protected by their role and have a certain freedom of action. In comparison to the study of newspapers this experience is made directly: The simulations allows to feel the physical and psychological pressure also as feelings, which are connected with the acquisition and use of power.

In addition a simulation game trains to better see the system of political decision making processes. At best the feeling of being exposed to something undefined and incomprehensible changes to a feeling of security, which means to be able to move freely within the frame of one's own role.

Simulation games also show us how different terms like "democracy", "participation" or "sustainability" can be understood. For some economic prosperity is a product, for others it is a precondition for a democratic society, and still others think that they only have indirectly something to do with the concept of democracy. One participant for example associates with democracy ethical values another one the responsibility of the state to control economic or social policy.

In the ideal case this method allows to experience exemplary the already mentioned dimension of politics.Therefore some requirements have to be fulfilled:

The success of a simulation game depends on the way in which the playful process is reflected. It is the role of the facilitators to clearly define the end of the game, and to help the participants to leave their roles behind them.

When evaluating, the results of the process are not to focus on, but rather the multiperspective descriptions of the participants and how they felt in their roles. Experience shows, that these feelings diverge strongly from each other.

A different aspect is the transfer to reality. Which experiences from the simulation can the participants transfer - in their professional day to day life or the political situation in their country. 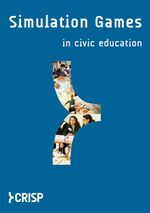 CRISP is working since 2007 in the fields of civic education and civil conflict management by using simulation as a methodological approach.